Showing posts from July, 2013
Show all

The ESCOs in the Duquesne (Pittsburgh) region also offer another option when switching electricity - choosing if a customer wants a certain percentage his or her electricity to be generated via renewable sources (most use wind and/or solar). Here I have graphed another time series (Oct 2010 - Jul 2013), this time comparing the average rates of plans that have renewable generation. Plans offered in the Duquesne region offer 2%, 12%, 20%, 50%, and 100% renewable options. Observations: 1 - On average, renewable plans through ESCOs are competitive to Duquesne's price to compare (PTC). While the 100% Renewable plan was initially higher than the PTC, it stayed consistently lower for over a year (Apr 2012 - May 2013). 2 - As expected, the lower the percentage of renewable generation, the cheaper the tariff. The average rate for 50% renewable plans, however, strayed from this trend - it was the lowest rate offered between May 2012 - Dec 2012. I will follow up with re
1 comment
Read more

This time series graph shows a comparison in electricity rates between four different plan options in the deregulated energy market in Pittsburgh, Pennsylvania. ESCOs give you the option to switch electricity from distributors such as Duquesne, and customers have an option to choose between fixed term or variable rate plans. A fixed term plan entails a standard rate for a "fixed" period of time - 6 months, 1 year, or 2 year (some ESCOs have recently started a 3 year fixed plan, but not enough data was present to draw any conclusion). Variable entails a possible month to month change in rate. Here I have graphed the average rates for 6 month, 1 year, and 2 year fixed plans over time against both the average variable rate and against Duquesne's price to compare. The inclusive dataset ranges from September 2010 to July 2013. The three fixed rates (in gradients of blue) are competitive to both the average variable rate and Duquesne's price to compare. On averag
1 comment
Read more

By Unknown - July 12, 2013
The Washington D.C. Public Service Commission today held a hearing - GD 117, "for an investigation into the business practices of alternative energy suppliers in the District of Columbia". The Commission has received 335 complaints since January 2013 regarding claims of "slamming" and "cramming" by some of the 121 suppliers of electricity in the DC region. Slamming refers to the practice of switching your electricity provider to another provider without a customer's consent, and cramming refers to the practice of placing unauthorized, misleading, or deceptive charged on your electricity bill. Testimony from about 40 customers and customer groups' legal representatives highlighted numerous accounts of highly questionable, unethical, and possibly illegal marketing (Public Service Commission code explicitly dictates the forms of energy marketing that are, and are not allowed) tactics among alternative energy suppliers in the DC region. Many cust
1 comment
Read more

By Rajiv - July 08, 2013
As we previously posted , some customers have been unhappy with their decisions to switch power providers. This problem continues according to Pennsylvania’s Public Utility Commission (PUC), with some providers advertising their services as fixed price when they are anything but . The PUC’s stance can be summed up in the following statement: “[w]hile consumers are expected and encouraged to carefully review the disclosure statements, presenting a product as having a fixed price that in fact vary for any number of reasons could be seen as misleading.” What some providers advertise as a “fixed rate” of payment is actually a “fixed rate with pass-through clauses.” This sounds a bit jargon-y, but simply put this means that additional costs that are levied on the electricity supplier can be pushed onto the customer while not technically betraying the “fixed rate” advertising. These additional costs can come from the Federal Energy Regulatory Commission or even the PUC. Several so
1 comment
Read more

By Rajiv - July 08, 2013
Deregulation of electricity markets in Pennsylvania has opened a variety of opportunities for easier access to renewable power. For example, the Sustainable Energy Fund (SEF) aims to help communities in Eastern Pennsylvania fund sustainable energy projects.  Deregulated electricity markets put more power in the hands of the consumer, and with this power comes the need to be educated about different potential sources of and responsible practices regarding power generation. To address this, the SEF also holds several events, such as the Energy Path Conference , to educate the community about clean energy and issues involving the future of electricity markets. The SEF represents one of many ways in which communities stand to benefit from deregulated power markets. With the transparency deregulation allows, SEF allows for increased savings and more straightforward paths to renewable energy financing for small businesses and members of the community. The opportunities are quite
2 comments
Read more

By Anonymous - July 08, 2013
Maryland’s electricity market is plagued by higher prices than many neighboring states as a result of its lack of local generation capacity, with over 30% of its required electricity being pumped in from other states. This electricity costs more due to transportation charges and technical losses, raising the final price for service delivery.  Some lawmakers have suggested reducing Maryland’s dependence in electricity imports by constructing a new power plant in Maryland that would be paid for through an indirect increase in supply costs that are built into every electricity customer’s bill ( http://articles.baltimoresun.com/2011-10-03/business/bs-bz-hancock-bge-reregulation-20111003_1_electricity-deregulation-maryland-suppliers-plants). Opinion about this endeavor is obviously mixed, as higher short term prices for consumers would be unpopular, but the investment in local generation offering probable savings over the long term.
1 comment
Read more

By Anonymous - July 05, 2013
The Public Service Commission of Maryland has established an interesting system for regulating electricity costs for consumers, based around the idea of “Standard Offer Service” being provided by utilities at the best possible price “in light of prevailing market conditions” for customers. While this sounds good in theory, the PSCM has actually found that third party suppliers are on average 10% cheaper than Standard Offer Service. This price difference represents a service overpayment of $150 annually per customer according to the same report ( http://webapp.psc.state.md.us/intranet/Reports/2010-2019%20Ten%20Year%20Plan.pdf) . This significant discrepancy will likely be remedied by increased awareness about fair value pricing in competitive electricity markets.
1 comment
Read more

By Anonymous - July 05, 2013
While neighboring Pennsylvania saw explosive growth when retail customers were first able to purchase electricity from competitive suppliers, customers in Maryland have switched to alternative suppliers at a much slower rote. Only 3% of residential customers had actually switched to a new supplier as of 2009, a paltry figure when compared to the near half of customers switching in Pennsylvania.  Late 2011 and 2012 began a dramatic upswing in residential electricity purchasing in Maryland however, with over 22% of customers having switched by mid-2012 ( http://esm.versar.com/pprp/factbook/01MD_Power_Industry.htm) . The direct cause behind this growth isn’t easy to pinpoint but great awareness of the availability of third party power providers probably played a major role in growth over the period.
1 comment
Read more

By Anonymous - July 03, 2013
Indiana lawmakers recently commissioned a report to be delivered no later than November 2013 to assess the potential benefits of moving to competitively supplied electricity. This study follows on the heals of increasing pressure to consider some form of modified or deregulated market for the state’s consumers. In a recent interview former FERC Commissioner Bill Massey stated that deregulated markets have delivered average costs that are 11.8% lower than their conventionally regulated counterparts. These savings are particularly valuable to local businesses and energy-intensive industries looking to streamline costs. While not all are sold on the merits of deregulation, Indiana lawmakers believe that the possibility at least deserves further consideration ( http://www.midwestenergynews.com/2013/05/14/michigan-indiana-warm-to-the-idea-of-expanding-consumer-utility-choice/) .
1 comment
Read more

By Anonymous - July 02, 2013
There have been increased conversations in Michigan regarding further deregulation of electricity markets following on the heels of legislation introduced in October of 2012. At present, only 10% of Michigan’s electricity sector is open to competition and most customers are still locked into purchasing from major state utilities. Many customers are interested in accessing the same low rates made available to customers in other states through deregulation, but so far proposals to increase the competitive size of the market have been unfruitful. While debate exists about the long term consequences of deregulation (http://bridgemi.com/2012/10/guest-column-electric-deregulation-cap-protects-customers/), customer savings would almost certainly result from a further increase in competition.
Post a Comment
Read more 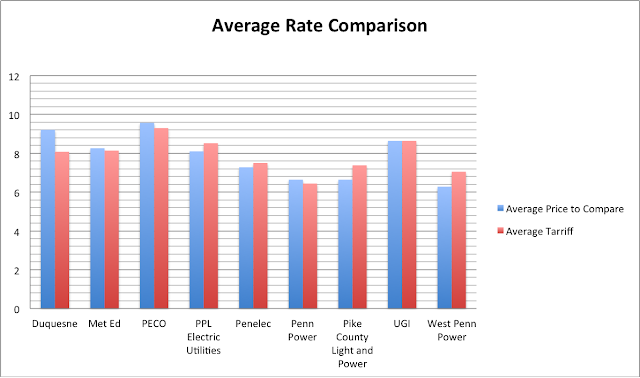 The Energy Information Agency reported that average electricity usage in Pennsylvania was 870 kwH/month in 2011. Using that as a standard consumption rate, I calculated the different types of average costs to a consumer for choosing an ESCO versus the default distributor. First, in 4 out of the 9 distributor regions, it turned out to be cheaper to use an ESCO on average. In Duquesne, Met Ed, PECO, and Penn Power regions, the average ESCO price is cheaper than the default distributor. Of course, this is not taking into account nuances in fixed vs. variable plans, renewable generation, and cancellation costs (if any). More to come soon!
Post a Comment
Read more

By Unknown - July 01, 2013
Ben and I recently started working with recent data from ESCOs in Pennsylvania to observe trends in their pricing schemes. I'll be making a few posts based off of the database querying we did and (hopefully) graph some of our findings. Since the prices range from September 2010 to June 2013, the analysis will be what customers could have chosen in hindsight, but hopefully will point to trends to direct customer's future decisions for optimizing their preferences (100% renewable, cheapest option, fixed or variable pricing, etc).
Post a Comment
Read more
More posts